Continuing on from my two previous posts (These (Hiking) Boots Were Made For Walking) and One Explosive Hike!), this time I’m writing about Tongariro National Park (TNP) in a general sense. Maybe because it’s Winter, maybe because I’d rather be (trying to) snowboard, or maybe just because I want to.

Lets start with some Fast Facts, that aren’t necessarily fast or slow but may be of interest:

• Tongariro is made of the Maori words for “south wind” (Tonga) and “carried away” (riro).

• TNP was the first national park established in NZ and came about in 1887.

• TNP has notable spiritual meaning in to its local Maori tribe, hence the creation of the national park to preserve its significance.

• It consists of 792 square kilometres and has three peaks – Mt Tongariro, Mt Ngauruhoe and Mt Ruapehu.

• One million people visit EVERY YEAR!

The namesake mountain of this world heritage site, Mt Tongariro is home to the Tongariro Alpine Crossing. This day hike is 19.4 kilometres of varied landscape and ecology (think shrubby herbs, slippery scree, snow fields, lakes, and forest). It is a compound volcano, meaning it has more then one cone. In fact, Mt Tongariro has TWO active vents… Risky business but some reassurance can be taken from the fact that the Red Crater last erupted over 110 years ago. But maybe that means it’s due, as that is a long time not to let off steam… hahaha. The Te Maari crater erupted only a few years ago. My advice – be a fast runner but also a smart runner. Don’t just lose your head and start running in circles; run AWAY from the hot spot and preferably onto higher ground. That is all the advice I have.

Aesthetically-pleasing, Mt Ngauruhoe is a symmetrical, far-reaching mountain whose cone is often shrouded in cloud. It has the shape and features of a classic “movie” volcano. Obviously, I’m not the only one who thinks this as Mt Ngauruhoe featured in The Lord of the Rings as the fiery Mt Doom. At 2300 metres high, the walk up Mt Ngauruhoe is no easy task (but it is fun). The most common interpretation of Ngauruhoe is “throwing to stones.” Ow. As this volcano last erupted in 1977, present-day injuries are mainly caused by falling rocks and losing control on the scree. All I can say for this hike is BE PREPARED – first aid kit, appropriate clothing, snacks and water – the whole kit and kaboodle. 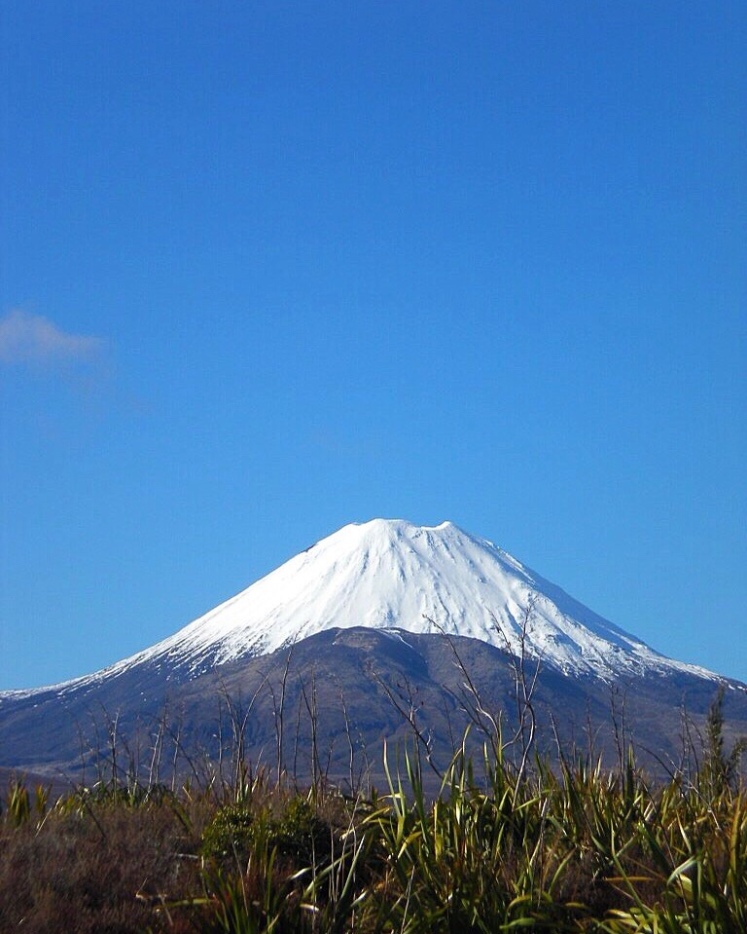 Rounding out the trifecta is Mt Ruapehu. It has multiple peaks but its summit, Tahurangi, is the highest point in the North Island. With 2 ski fields, Whakapapa and Turoa, Mt Ruapehu is a network of chairlifts, T-bars, cafes, chalets, lodges, roads and of course, snow-lovers. The ski field boundaries alone cover over 1000 hectares! Avalanches and volcanic eruptions are possibilities but the Ski Patrol is all over it and safety is at the forefront of activities. Mt Ruapehu seems the least stable of the volcanoes, with frequent tremors and small eruptions but I’m not a geoscientist so what would I know. I do know it is a beautiful drive up to Whakapapa Village and the snowboarding is GREAT! The Chalet is worth a visit if you’re feeling classy or you can enjoy a casual hot chocolate in the ski field cafes. A side note: I ordered a hot dog in the cafe and rather then get a dog in a bun, I received a battered dog on a stick. Better known as a Dagwood Dog or Pluto Pup to Aussies. This information has nothing to do with either volcanoes or skiing, but is important if you have serious lunchtime hankerings for a dog-in-a-bun and don’t want to experience cross-cultural confusion.